The table below provides details of the movement in average investment returns from various asset classes for the period up to 31 July 2019. 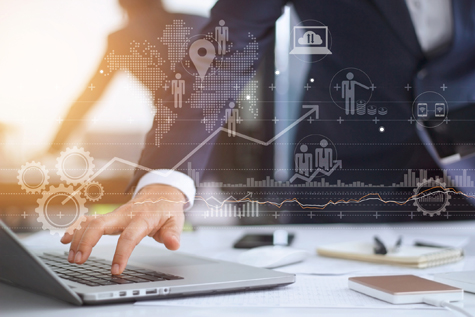 Hindsight is a wonderful thing and given the events over recent days it could be suggested that July was the calm before the current storm. The calm of July turned when at the end of the month Fed Chair Jerome Powell indicated that the July cut was not necessarily the start of a cutting cycle, rather a mid-cycle adjustment. Then the storm really started with a tweet from US President Donald Trump on the 1st August escalating the trade war. In the tweet, Trump declared a 10% tariff on the remaining $300 billion of imports from China, effective 1st September.

Prior to this, July was a period of relative calm with a continuation of the bull market and healthy returns across the major asset classes. Despite slowing economic conditions, the market anticipated favourably the Fed’s first rate cut in over a decade with the Federal Funds rate cut by 25 basis point to a range of 2.0% to 2.25%.
Locally the RBA also cut interest rates by 25 basis points to 1.00% as inflation continues to undershoot the RBA target range. Underlying inflation has fallen to the lowest level in over two years and a range of data points indicate slowing economic conditions. Business conditions have weakened, slowing ANZ Job ads, a slump in building approvals and confirmation of weak credit growth in June all combined to give the RBA the impetus to cut rates for the second time this year.
Australian inflation running below the target range 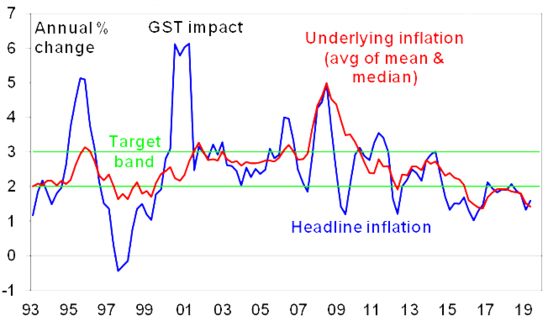 Source: ABS, AMP Capital
There are rising concerns that the US expansion (now the longest ever) is ripe for a recession. Many commentators point to a range of reason why this will or won’t happen in the near term. The concern is that the economic impact of the trade war will have negative impacts to both the Chinese and US economies that, in addition to other stresses, could result in a contraction in economic activity.
With the US yield curve recently inverting (long term rates being lower than short term rates) some have suggested this is an indication of an impending US recession. However, with continued support from monetary policy, unemployment falling to multi decade lows and limited growth in public sector debt, there is little supporting indicators to suggest a recession is imminent.
US yield curve inversions and recessions

Source: NBER, Bloomberg, AMP Capital
In the UK, Boris Johnson was elected Conservative Party Leader with 66.4% of the vote, beating Jeremy Hunt with 33.6% of the vote. It is unclear how changing Prime Minister will change either the European view of what they are willing to accept in a Brexit deal or indeed what the UK parliament will accept, which at this point is nothing. Time will tell but early signs from Europe in recent days is there is no change.
Share markets
Despite slowing economic conditions and escalation in tension with Iran, global equities continue to rise. Mid-month the Fed Chair confirmed expectation for a rate cut later in the month which provided support to share prices in the US resulting in the S&P 500 gaining 1.4% over the month.
The US market was supported by some positivity in US reporting season. According to FactSet, as at the end of July, blended earnings growth rate stands at -1.9%, better than the -2.7% expected at the end of the quarter. Roughly 76% of companies have surpassed consensus earnings expectations. In aggregate, companies are reporting earnings nearly 5.5% above expectations ahead of the 4.8% five-year average. Big earnings takeaways this season have revolved around a healthy US consumer, softer industrial, macro uncertainty, outsized tariff focus, cost saving and pricing initiatives, and negative revisions/lower 2H estimates.
International shares gained 1.1% during the month on a currency hedged basis. In Europe, shares were flat despite what was regarded by many as good news of the nomination by EU leaders of Christine Lagarde to head the ECB (subject to majority EU parliament support). She is considered to be supportive of the ‘whatever it takes’ approach set by Mario Draghi. Emerging markets were a little better gaining 0.6% on an unhedged currency basis,
Australian shares were strong gaining 2.9% for the month, outperforming the global market. The market was supported by the outperformance of the small cap (4.5%) space which significantly outperformed the large caps. With report season to commence in August, we will see if the surprise seen in the US results is reflected in Australia.
Consumer staples was the standout sector in July (+9.8%), followed by Health care (5.9%) and Info tech (5.0%). The weakest sector was Materials (1.0%) with all sectors gaining over the month. Resources (1.1%) and Energy (1.7%) were also among the weakest sectors.
The best performers in the S&P/ASX 100 were A2 Milk (23.6%) with increases in the recommended retail prices leading to earnings upgrades and offsetting rising dairy prices. Magellan (18.6%) continues to experience solid net inflow and was supported by continued rising equity markets. Treasury Wine Estates (13.5%) reversing its downward shift in dramatic fashion with the company guiding 15-20% EPS growth in 2020. Amongst the worst performers was Cimic (-18.0%) which reported first half profits lower than what many analysts were expecting as the company faces weakness in Hong Kong construction. AMP (-15.6%) on the back of the announcement that the sale of AMP Life was highly unlikely to proceed as proposed due to failure to receive approval from RBNZ and that there would be no first half dividend. Iluka (-10.7%) also struggled with weak second quarter revenues and higher cash costs.
Interest rates
Bonds continued to perform well despite the positivity in equity markets. Domestically the Australian 10-year yield fell 12 basis points to a new record low of 1.20%. This was driven by expectations for further cuts by the RBA and signs of further weakness in economic conditions.
Australia 10 year yield 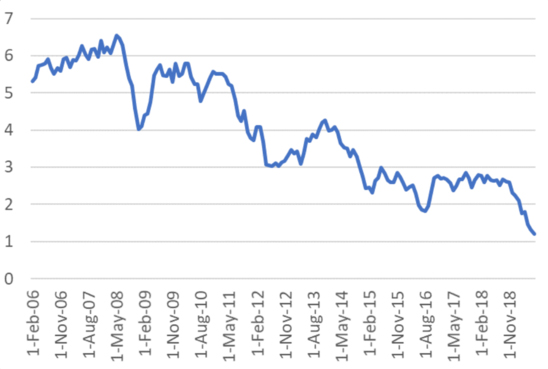